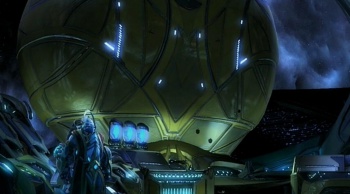 The long-awaited conclusion of the StarCraft II trilogy will begin closed beta testing this month.

Earlier this month we ran a report that the Starcraft II: Legacy of The Void beta would be starting as soon as this month, and it now looks like it was spot on the money. Blizzard has today announced that closed beta testing will indeed begin on March 31, with invites initially restricted to media and eSports personalities, before gradually rolling out to the general populace.

"This initial phase of the closed beta will include ongoing changes to previously-announced MP units as well as the introduction of a new Protoss unit - the Adept," said Blizzard. "Players with access to the closed beta will be able to check out PVP multiplayer action as well as Archon Mode, a cooperative/competitive MP mode, where two players share and control one base/army against another opponent or team."

For some more info the Adept: it's a basic ranged ground unit that has a neat little ability that sends out a mirror image of itself. After a fixed duration, the unit teleports to the location of its duplicate. Both the Adept and its mirror image can move independently of each other, so it's sure to be a fun way to have little micro mind-games with your opponent.

In addition, Blizzard announced three new maps that will be made available to beta testers: Ruins of Seras - an ancient temple in a mountainous region, Lerilak Crest - a Dark Templar world embedded by xel'naga ruins, and Orbital Shipyard - a Terran starship repair platform.