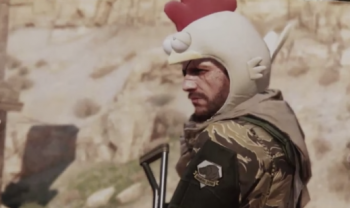 Konami and Kojima's statement skirts the actual issue of whether or not Kojima will leave after MGS V.

In one of the most ludicriously PR-heavy statements I have ever seen, Hideo Kojima and Konami have "commented" on the rumors concerning Kojima Production's impending disbandment. I put "commented" in quotation marks, because the statement, while assuring fans that MGS V and the future of the Metal Gear series isn't in any jeopardy, doesn't actually address the issue. Judge for yourselves:

Thank you for your continued patronage of KONAMI products and services.

The latest title in the METAL GEAR series,"METAL GEAR SOLID V: THE PHANTOM PAIN" (below, "MGSV: TPP"), will be released as planned starting on Tuesday, September 1st, 2015 in North America, Latin America, and Europe, followed by Japan and Asia on Wednesday, September 2nd. Hideo Kojima will remain involved throughout.

Hideo Kojima stated, "I want to reassure fans that I am 100% involved and will continue working on METAL GEAR SOLID V: THE PHANTOM PAIN; I'm determined to make it the greatest game I've directed to date. Don't miss it!"

In addition, KONAMI will continue to develop and distribute top-quality content in the METAL GEAR series following "MGSV: TPP." We greatly anticipate and deeply appreciate your ongoing support for METAL GEAR.

As the next step in the series, KONAMI has already resolved to develop new "METAL GEAR".

We will be conducting interviews for main staff to lead the development.

As you can see, while the statement says there's a new Metal Gear title on the way, it doesn't actually say whether or not Kojima, or his development studio, Kojima Productions, will be involved. In other words, it's a useless statement. I don't think anyone was doubting that Konami would continue running the Metal Gear train with or without Kojima.

The fact that Kojima had to give this statement jointly with Konami, rather than by himself, also gives credence to the suggestion that the developer has had his communications restricted as part of the on-going power-struggle going on at Konami.

We've reached out to Konami for a proper comment, but it has been fairly silent thus far, and we aren't expecting much more.