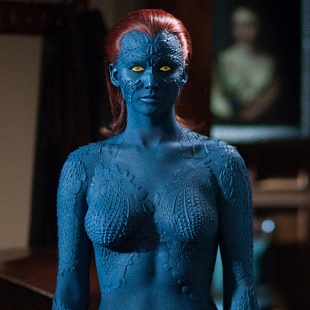 Jennifer Lawrence will not reprise the role of Mystique after X-Men: Apocalypse.

One of the toughest things about making movies as compared to comics is the fact that while characters can persist endlessly on paper, actors grow, change and usually leave at some point. Take the X-Men movies, for instance. Up until now, the most recent series of X-films has had the good fortune to keep its principal cast together and intact. Sadly, if Fox intends to continue with the franchise after its next outing, it now looks as though it will have to move forward one actor short.

According to actor Jennifer Lawrence X-Men: Apocalypse will be her last film with the series. News of her departure emerged from an interview where Lawrence, speaking with MTV, briefly confirmed that she'll be exiting the franchise after the next movie. Lawrence, of course, plays the shape-shifting mutant Mystique and was featured prominently in both X-Men: First Class and Bryan Singer's follow-up film X-Men: Days of Future Past.

The big question, of course, is what Lawrence leaving will mean for the character Mystique. Rumor has it that Apocalypse, much like the first two films, will feature Mystique in an important narrative role. If that's true, one can't help but wonder if Lawrence's exit could be fatal for the character herself. Granted, the series could just replace her with another actor. That said, considering Lawrence's current popularity and clout, they'd be stepping into some big shoes. X-Men: Apocalypse is currently slated to hit theaters on May 27th, 2016.