The Good, The Bad, and The Bald. 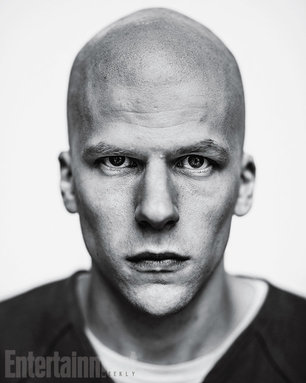 Today we get to add one piece of big, bald intel to the sporadic snippets of information we've received about Batman v Superman: Dawn of Justice so far: a first gander at Jesse Eisenberg's Lex Luthor. Entertainment Weekly's exclusive look at Eisenberg's Luthor depicted the notable villain in a black and white headshot; an intriguing way to feature the billionaire-by-day, villain-by-night.

Zack Snyder, Director of Batman v Superman, said that Eisenberg's depiction of Luthor is "not like any of the Lexes that you've seen, that's for sure, other than him being a captain of industry and one person to the world and another person to himself. And bald, of course."

Snyder continues with his ominous tone by casually stating that Eisenberg's Luthor "says what he believes and says what's on his mind. If you can unravel the string and decipher what he means, it's all there."

Judging by Eisenberg's look of cold determination in this photo and the portrayals of his previous roles, including The Social Network, I feel confident that Eisenberg will be able to depict those megalomaniacal tendencies Luthor is known for.

How do you feel about Eisenberg's upcoming portrayal of such a famous villain?