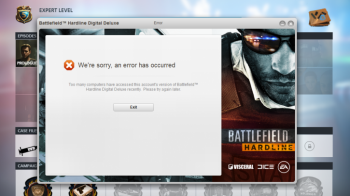 Feel like testing Battlefield: Hardline on multiple PCs? Be prepared for Origin to lock you out with DRM it hadn't previously mentioned.

Hey, remember when publishers were figuring out that DRM was ineffective and began scaling it back? Wasn't that wonderful? Well, there's still a few more hurdles to sort through. It turns out the recently-released Battlefield: Hardline is bundled with DRM that wasn't explicitly mentioned on its Origin page. And not your run-of-the-mill DRM either - this is the kind from three years ago that locks you out for changing your video card too many times.

Reports from Techspot and Guru3D state that Origin locks players out of Hardline for playing on eight computers in a short span of time - which means it's naturally triggered by changing your PC hardware. While this DRM probably won't be discovered by the average PC player, it's a huge challenge for anyone testing hardware benchmarks.

Techspot discovered this first hand when reviewing Hardline became a slow and painful slog. "We had to cut some testing as EA's platform only allows us to change the CPU/GPU up to eight times per account before locking us out," Techspot writes. "We were forced use four different accounts to produce this article! After eight hardware changes we get hit with 'we're sorry, an error has occurred...too many computers have accessed this account's version of Battlefield Hardline recently. Please try again later.'"

Now that particular phrasing suggests Hardline can be reset eventually - it just depends on what EA means by "recently". But it's still confusing since Battlefield: Hardline's Origin page doesn't mention such a system - let alone how many computers can run the game before it locks. Regardless, Techspot's review notes that Hardline is still locked on multiple accounts, preventing them from doing further testing.

Origin has faced controversy for hardware monitoring in the past, although EA has stated that no personal information is collected with the data.