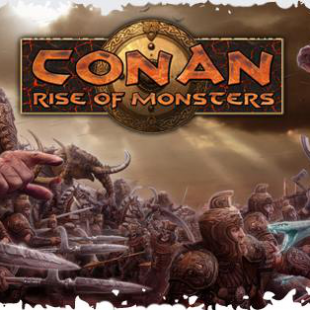 Pulposaurus Entertainment has announced its intention to Kickstart a new miniatures war game based on the adventures of Conan the Barbarian.

Just a few weeks ago the fine folks at Monolith Games found themselves on the winning end of the most impressive tabletop victory in Kickstarter history. Raising funds for a new board game based on the classic character Conan the Barbarian, the game makers managed to rake in a whopping $3.3 million from more than 16,000 contributors. Not content to let there be only one Conan game on the market however, the recently formed Pulposaurus Entertainment has announced that it too will be producing its own game based on the works of writer Robert E. Howard.

Dubbed Conan: Rise of Monsters, Pulposaurus's game was unveiled last week at the GAMA Trade Show in Las Vegas. A mass-combat miniatures game, it will put players in control of diverse armies made up of "exquisite 28mm plastic pre-painted" miniatures. The game will launch with a of variety starter boxes available, each of which will come packaged with the game's rules, "special dice," cards, markers and "a complete starter army." The armies will be split into two sides with one aligning with Conan and his Circle of Iron and the other with baddie Thoth-Amon and his Legion of Set. Supplemental packs will also be released with additional "warbands, leaders and monsters."

Pulposaurus Entertainment itself is made up of an "innovative team of industry veterans" including Jack Emmert, Shane Hensley, George Vasilakos and Timothy Brown. Between the four of them they have experience at a wide selection of companies including Cryptic Studios, Wizards of the Coast, Eden Studios, Pinnacle Entertainment and more. Just like Monolith, the quartet plan to launch their own Kickstarter later this year to raise funds for the game's production. They hope to release it in the first quarter of 2016.