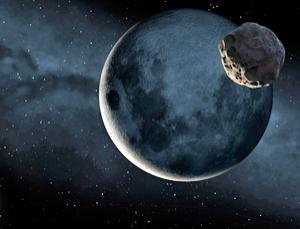 NASA has announced its new mission to put a small asteroid in orbit around the moon by 2025 - and it could help plans to explore Mars.

A little over two years ago, NASA raised the possibility of putting an asteroid in orbit around the moon. Now the space agency has announced it's launching a mission to do just that. On Dec 2020, scientists will send an unmanned, solar-powered rocket into space with a single task - snatch a 13-foot boulder from a nearby space rock and drag it into orbit around our moon. What's more, the mission isn't just to prove we can do it - it could prove invaluable for training astronauts on upcoming missions to Mars.

"It really gives us an opportunity to demonstrate capabilities we're going to need for future human missions beyond low-Earth orbit and then ultimately, to Mars," NASA associate administrator Robert Lightfoot told reporters. In a later statement, he added that "the option to retrieve a boulder from an asteroid will have a direct impact on planning for future human missions to deep space and begin a new era of spaceflight."

Now if you read our original 2013 story you may have noticed NASA was literally considering catching an asteroid in a bag and carting it to the moon. Sadly, that awesome plan won't be happening - the unmanned craft will grab a boulder with robotic arms instead. The new plan is estimated to be $100 million greater than the last - since bags are cheaper than robot arms - but the was ultimately chosen so NASA could test technologies essential for future planetary missions. Grabbing technologies and "soft landings", as Lightfoot put it, apparently can't be conducted using a giant sack.

Once the asteroid is in orbit around the moon, astronauts will fly to it for a secondary 2025 mission to document it and walk across its surface. Presumably that won't take long with a 13-foot boulder, and might look ridiculous with two astronauts standing on it at once. All the same, it could represent one of the biggest steps in space travel since the moon landing. The mission is projected to cost $1.25 billion plus the not-insignificant expense of actually sending a rocket into space.