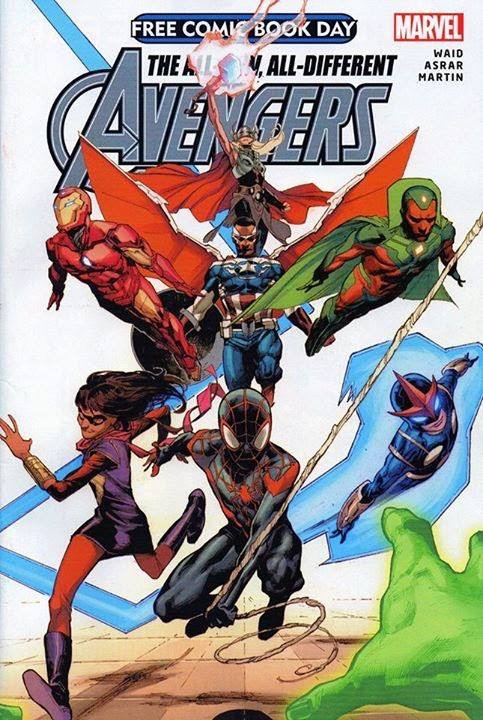 Marvel has some big plans for 2015, with the biggest obviously being the launch of its new Secret Wars event. Over the course of a new series of event books, the 616 and Ultimate universe will collide, potentially bringing both to an end to make way for a new, unified universe. In the aftermath of that event the comic publisher intends to launch several new series, including a pair of new Avengers books. The first will be a female-led comic dubbed A-Force. The second will be called All-New, All-Different Avengers and feature a smaller, more eclectic team whose members, up until recently, have been a mystery.

Marvel changed that this week with a series of teaser images gradually unveiling the identities of the All-Different team members. The final image was released today, revealing that its full roster will include (female) Thor, Sam Wilson as Captain America, Iron Man, Vision, Nova, Ms. Marvel and Miles Morales as Spider-Man. Marvel will be giving away the first issue of All-Different for free as a part of this year's Free Comic Book Day. Free Comic Book Day is currently scheduled for Saturday, May 2nd.

The big surprise with this reveal, obviously, is the inclusion of Miles Morales as a member of the team. While we've known for some time now that Ultimate universe will be ending as a result of Secret Wars, Marvel hasn't offered many clues as to who will survive its collapse. This would seem a fair sign, however, that Miles will be joining the 616 universe (or its replacement) following the end of the new event. As a big fan of both Miles Morales and Ultimate Spider-Man, I can personally say I'm happy about that.