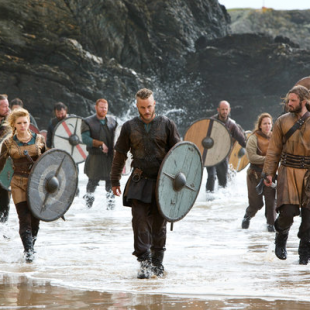 After scoring strong ratings with the early episodes of its third season, the History Channel has ordered a fourth season for its scripted series Vikings.

Back in 2013, the History Channel decided to take a step away from its educational fare and take a chance on its first scripted series: Vikings. A work of historical fiction, it focused on the legendary warlord Ragnar Lothbrok, the show instantly won over audiences with good writing, visceral battles and great performances from its cast.

Last month the show launched into its third season and, while it still has a way to go, the reaction from viewers has apparently already been really good. So good, in fact, that the History Channel has announced that it has green lit the show for a season four. "Vikings has raided the hearts of both audiences and critics, establishing itself as one of the most compelling, visually stunning dramas on television," said History general manager Dirk Hoogtra. The first five episodes of season four have apparently averaged 4.3 million viewers, making it the most viewed cable series on Thursday nights across all of the key demographics. Filming of season four will commence this spring in Ireland.

Just speaking personally, I couldn't be more happy about this news. Vikings has had me hooked since its first episode and, since then, each new season has only dragged me deeper into its world. If the History Channel thinks it can keep the show's momentum going through a fourth season, I and many others will happily be waiting to see where it takes us next.