Maisie Williams is adding time travel to her bag of tricks. 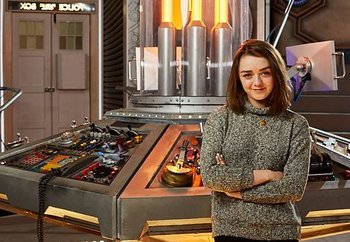 Get ready for an incoming wave of new crossover fanfics! BBC announced today that Maisie Williams will guest star on the upcoming ninth series of Doctor Who. Williams, best known for her portrayal of Arya Stark on Game of Thrones has already begun filming her guest role for the classic series which is slated to return to BBC One later this year.

Williams, who looks ready to give the Doctor a run for his money, told BBC,

"I'm so excited to be working on Doctor Who as it's such a big and important part of British Culture. I can't wait to meet the cast and crew and start filming, especially as we'll be shooting not too far from my home town."

And she's not alone in her excitement. Lead Writer and Executive Producer Steven Moffat added,

"We're thrilled to have Maisie Williams joining us on Doctor Who. It's not possible to say too much about who or what she's playing, but she is going to challenge the Doctor in very unexpected ways. This time he might just be out of his depth, and we know Maisie is going to give him exactly the right sort of hell."

Sounds about right. Williams has proven her ability to give "the right sort of hell" to just about everyone in Westeros, so it's obvious to see how that rambunctious nature could easily translate into the world of Doctor Who.

How do you feel Williams will fare in her guest spot?

Source: The Mary Sue, via BBC