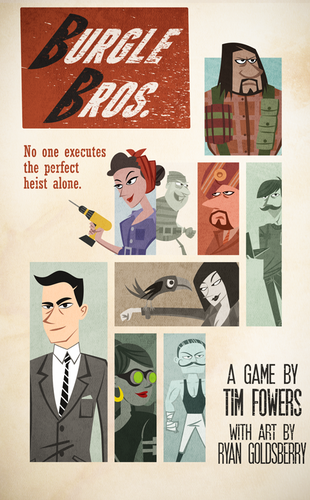 Burgle Bros. Kickstarter campaign wants to bring all the excitement of Ocean's 11's heists to your tabletop - no actual lawbreaking required.

Thrilling heists aren't just a fun movie premise - they're great gaming material. Whether you're playing the action-focused Payday 2 to the more cerebral Monaco, there's lots of fun in working as a team to escape the guards with your loot in tow. But what if you want to recreate the experience at your tabletop? Tim Fowers has the answer with Burgle Bros., a co-operative heist board game for 1-4 players now on Kickstarter.

In Burgle Bros., players assemble a specialized team of thieves and criminals attempting to pull off a spectacular heist. The facility is randomly generated by shuffling a deck of room cards, each with their own challenges and weaknesses - such as alarms, cameras, or other electronics. Meanwhile, guards conduct regular patrols across each floor, and if one catches a teammate who's out of stealth bonuses the game is over.

Before the match, players can review the facility "map" and plan a course of action based on the unique skills of each teammate. The Spotter, for example, checks the guard's next patrol while the Hacker can access systems from any floor with a WiFi connection. You also have the explosive expert Rigger, the safecracking Peterman, the quick-moving Acrobat and more.

Of course, like any good heist story, your plan won't necessarily survive execution. Maybe the guards will change their patrol at the wrong time, or someone will set off an alarm by mistake. The most likely outcome of any game will probably be a mad dash to the escape chopper on the roof - all while trying to avoid the now-alerted security team.

Burgle Bros. is already doing exceedingly well on Kickstarter, currently sitting at over $150,000 of a $10,000 initial goal. What's more, the campaign includes some slick addons as well. "The High Rise", for example, lets you fit Burgle Bros.' three floors into a 20" wooden tower, giving the game a clever 3D feel. And since Burgle Bros. was directly inspired by Monaco, its creators have included a $34 Monaco Bundle that includes both the video and tabletop games.

Burgle Bros. is currently running its final four days on Kickstarter, and has a solid chance of tearing through its final stretch goals. If you're seeking a rogue-like board game that feels like Ocean's Eleven or The Italian Job, this is likely worth checking out.