But how many Titan fights will there be? 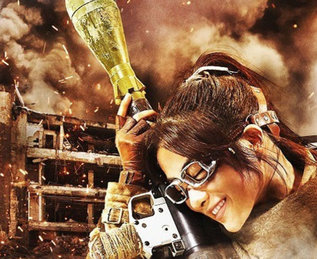 With the major success of Attack on Titan, it's no wonder so many opportunities for new AoT content have popped up, and apparently there's still more to come. We can now add a live-action TV series to long list of upcoming AoT content including the second season of the anime (sadly not releasing until 2016) and the two live-action films slated to release later this year.

The television series will feature Satomi Ishihara in her role as Zoë Hanji (also known as Zoë Hange), a member of the Survey Corps with an obsession/passion for researching Titans. The show will bring in cast members from the live-action movies including Nanami Sakuraba as Sasha, Shu Watanabe as Fukushi, Rina Takeda as Lil, and Ayame Misaki as Hiana, as well as feature some all-new characters created purely for the television series.

The series is set to air on dTV, a Japanese streaming service, in August of this year. The primary goal of the series is to tie together the two movies by featuring the Survey Corps in their downtime from fighting giant, people-chomping monsters.

Are you excited for another live-action rendition of Attack on Titan or would you rather see an earlier release date for season two of the anime?