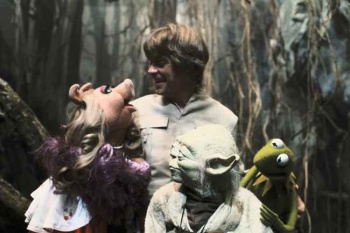 Star Wars Luke Skywalker meets Kermit and Miss Piggy? Joker jumped over The Dark Knight with a skateboard? All these and more happened once the cameras stopped rolling.

Your favorite childhood movies probably looked completely different on set than on screen. Actors playing spiteful antagonists were quite friendly. Massive setpieces were actually tiny props. Iconic characters walked around in half-completed costumes. And everyone - cast and crew alike - posed for goofy joke photos. Studying these moments gives us a fascinating behind-the-scenes look at each film - even as they change how we remember them forever.

So here, courtesy of Distractify, is a full gallery of fantastic examples. Apparently Luke Skywalker and Yoda used to hang out with Kermit and Miss Piggy. Joker launched himself over The Dark Knight with his skateboard. James Cameron swam with Titanic survivors while giving pointers to Leonardo DiCaprio and Kate Winslet. Maskless Boba Fett reveals an unassuming Dad figure with glasses and a thin mustache. And that MGM lion roar had to be recorded mere feet away from a real-life, honest-to-God lion.

Obviously these photos don't change the films themselves, but - in most cases - they're charming reminders that actors and directors are still regular human beings who enjoy goofing around like anyone else. Even Steven Spielberg, an incredibly influential modern director, used to have fun wrestling Jaws or giving E.T. a bath.

And this is only a tiny fraction of examples from a century of film history. Now I find myself wondering what shenanigans must have happened on Age of Ultron and The Force Awakened's sets.