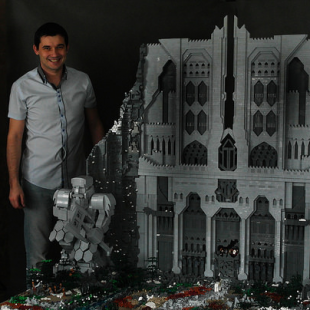 I'm going to go ahead and say that The Hobbit films weren't really all that good. They weren't especially bad either, mind you. It's just that when you compare them to the powerhouse product that was Peter Jackson's The Lord of the Rings movies, they're just kind of "meh." They still had a lot of neat things in them though, with one of the biggest ones being the dwarven city of Erebor. Excessively CGI'd as it (and the trilogy overall) was, it was still nice to get a deeper look at a dwarven city. It didn't hurt, of course, that its design was also just really cool. So cool, in fact, that LEGO builder Michal Kazmierczak took it upon himself to build his own miniature version of it.

Not that most would probably consider his diorama to be small. While obviously scaled down from the measurements of the film version, Kazmierczak's build is still stands a whopping 5 feet and 3 inches tall and contains more than 55,000 pieces. The build itself primarily encompasses the outer portions of the city, including two giant dwarf statues as well as a detailed landscape complete with invading orcs and a pair of elves that should be familiar to anyone who watched the movies. Not content with the model just being mildly impressive, he also used its rear portion to construct a limited interior complete with pillars, staircases and Thorin's company of dwarves. Overall, his Erebor took him about seven months to complete.

This, of course, isn't the first time that Kazmierczak's work has made its way onto The Escapist. Back in October 2014, we had the pleasure of showcasing another one of his works, an epic recreation of the planet Mustafar from Star Wars: Revenge of the Sith. That build, also five feet tall, used more than 60,000 LEGO pieces and took him four months to finish. Suffice it to say we'll be eager to see what he comes up with next.