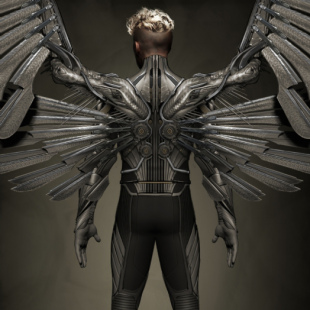 According to director Bryan Singer, actor Ben Hardy will play X-Men: Apocalypse's Angel and he won't be "very nice."

Confirming rumors that Hardy would be playing a key role in the film, director Bryan Singer, in a statement yesterday, announced that the actor would be tackling the role of Angel. If Singer's words are any indicator however, the version of Angel we see in Apocalypse will be a tad less wholesome than the one moviegoers might remember from the character's theatrical debut in X-Men: The Last Stand. "Ben Hardy is Angel - I shall confirm it for you!" said Singer. "But he's not a very nice Angel! And that's all I'll say..."

Alongside his confirmation, Singer and Fox have released a pair of concept art images showing off the new Angel from a rear perspective. Unlike the white-winged version played by actor Ben Foster, Hardy's rendition will have metallic wings with feathers resembling knives. Comic fans, of course, will probably immediately identify this as the character's Archangel persona, which he adopted after being genetically altered by the titular Apocalypse. If you've only experienced the X-Men through their moves, the key takeaway is that Archangel is kind of bad news.

X-Men: Apocalypse is currently scheduled to release on May 27th, 2016.