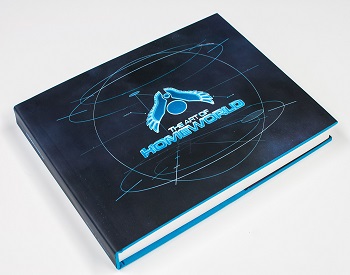 Earlier this week Gearbox released The Art of Homeworld, a 236 page compendium of concept art from the making of the Homeworld games.

Back in February Gearbox did the gaming world a favor with the launch of the Homeworld Remastered Collection. With its release, the company introduced an entire new generation to the franchise while also reminding the rest of us of just how special the series is. Not content to just leave it at that, Gearbox decided to add one more feather to its cap: The Art of Homeworld.

A $60, 236-page art book filled with drawings, level concepts, ship designs and more from the making of Homeworld and Homeworld 2, the book released earlier this week in the United States via Amazon and was an immediate hit among the game's fans. It was so popular, in fact, that the entire stock allotted for the U.S. sold out in less than a day. In other words, much like the game that preceded it, The Art of Homeworld is a success.

The big question now, of course, is how Gearbox intends to get more books to the clearly hungry masses. Speaking with The Escapist, the company confirmed that it's currently looking into options for getting more copies to readers in the United States. It couldn't, however, reveal any specifics for what it plans to do. In the mean time, the studio has plans to release the book in Canada, the United Kingdom and Japan. While we wait to hear more, feel free to check out some sample pages Gearbox was kind enough to give us.