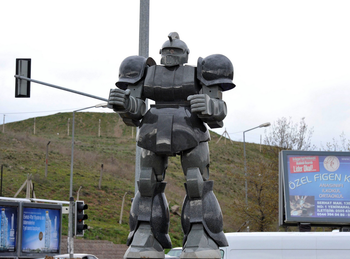 Turkish mayor Melih Gökçek is in some hot water over the creation of a Transformers-esque robot statue. Gökçek now has a criminal complaint filed against him by the Turkish Chamber of Architects and Engineers (TMMOB) due to his decision to use public money to create the 6 meter (nearly 20 foot) tall robot statue in the capital of Ankara. The robot itself appears to be a mashup of Transformers characters, but "cannot be named as such due to copyright issues," states The Independent.

While it was originally "believed that the statue was an April Fool's joke...bemusement quickly turned to anger when it was revealed how it had been paid for." The robot's main purpose was to promote an upcoming theme park in Ankara, a "prestige project" according to the mayor, while 20 additional metal bots are slated to reside in the completed theme park.

Although TMMOB representatives believe the robot to be a "monstrosity" and a waste of taxpayer money, Gökçek himself has defended his decision to place a giant robot in Ankara and even requested that people "respect the robot".

Do you respect the robot, or do you side with the TMMOB?