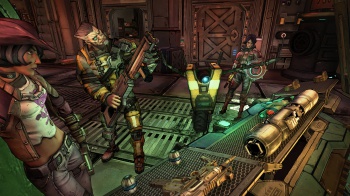 2K Australia was the last of Australia's big, AAA-style developers.

A bit of sad news for you folks today. A source close to Kotaku Australia has informed the outlet that 2K Australia - the guys behind the recently released Borderlands: The Pre-Sequel - is closing its Canberra studio and letting go all of its employees. 2K Australia was the last major AAA-style developer operating out of the country, and as well as The Pre-Sequel, worked on other 2K titles such as BioShock and XCOM.

2K offered the following statement, giving some hope that not all staffers had been canned, and some could relocated to other studios:

We can confirm we have taken steps to begin the studio closure process for 2K Australia in order to better manage ongoing development costs while improving the working proximity of our creative teams. We are very grateful for the team's valuable contributions to numerous 2K projects, and are working with affected staff to explore reassignment opportunities where possible.

Kotaku's source claims that at one point, a move to Melbourne was being planned, in an attempt to help attract new talent to the studio. This allegedly caused many high-level members of the team to leave and that may have factored into 2K's decision to shut down the studio.

The extremely high cost of operating a game development studio in Australia was most likely to blame for the ultimate decision.

It's always a shame to see game developers close their doors, but this one is particularly sad as it signifies the end of AAA development in Australia.