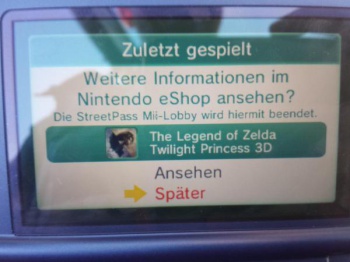 The image showing a StreetPass user as having played "The Legend of Zelda: Twilight Princess 3D" was made using a hack.

Some Zelda fans attending the Zelda Symphony concert in Dussledorf, Germany, over the weekend have unfortunately become victims of a rather clever hoax involving their beloved franchise. Some concert goers, upon opening up their 3DS, were met with a StreetPass'd Mii who claimed to have most recently been playing The Legend of Zelda: Twilight Princess 3D. You can see the image that greeted fans' 3DSs to the right.

Unfortunately, just like that Rayman in Smash Bros. hoax from a while back, The Legend of Zelda: Twilight Princess 3D only exists as mere title in a hacked 3DS. Thanks to some sleuthing from NintenDaan, we have learned that TaDavidID, the bloke who first posted the image to the right, and ChrisX930, who showed us he had made this very hack a few days ago, are in cahoots, and attended the concert together.

So sorry, Zelda fans, but this isn't a secret Nintendo employee playing an even more secret internet build of Twilight Princess 3D, but just a hacker having some fun at the expense of one of gaming's most fanatical fanbases.

Couple this with the denied rumors of a Zelda Netflix show, and the delay of Zelda Wii U, it has been a pretty disappointing year for Zelda fans so far.