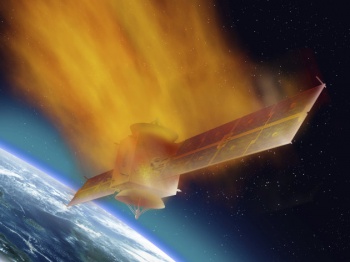 How do we get rid of pesky space debris? Let the International Space Station open fire with lasers!

These days it seems like everybody wants to go to space, but there's a hurdle in the way - increasing amounts of space debris. Between all the defunct satellites and spent rocket stages floating around, there's all kinds of clutter future astronauts will have to navigate around. Thankfully, a team of researchers have proposed a fantastic sci-fi solution: Fix laser guns onto the International Space Station and shoot debris out of the sky.

Published in the journal Acta Astronautica, the plan is fairly straightforward - and awesome. First, the Extreme Universe Space Observatory telescope would be modified to track space junk - effectively turning the telescope into a sniper's scope. Then the ISS would use a fiber optic CAN laser to fire upon objects, degrading their orbit to burn up in reentry. Considering these lasers were once used to power particle accelerators, they'd be more than suitable for the task.

According to the team's estimates, this system could track and destroy objects as small as a centimeter in diameter, which is important - even small space debris could mess up an astronaut's day. And while the cynicist in me worries this is the first step towards full blown space warfare, at least it's a deterrent for those potential alien invasions we've been expecting for decades.