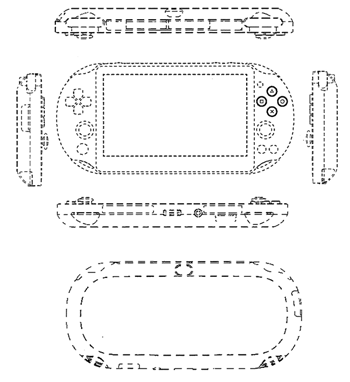 The PlayStation Vita may be due for another revision. A trademark application filed in Japan earlier this month by Sony Computer Entertainment has surfaced, suggesting that a new iteration of the handheld gaming console is on the way.

An image included in the application shows a design which very closely resembles the slim Vita we know today, but with what appears to be an additional cavity or panel on the left side of the device. The size and shape of this addition has been leading some to speculate that it could be home to an HDMI port.

It was widely believed that the Vita would support video output through an "accessory port" included in its original design, but it didn't come to pass as Sony opted to instead release PlayStation TV as a way of playing Vita titles on larger screens. The accessory port was subsequently removed in the slimmer, PCH-2000 hardware revision released in 2013.

Another notable difference between the slim Vita model and the application's image can be seen on the top of the handheld. Rather than one panel covering the PS Vita game card port as found on current Vita models, we see two offset panels, nearly identical to the design of the original Vita.

The image also lacks a few familiar features. While all of the face buttons are present and accounted for on the image, there are no buttons for power or volume control. While you could probably get away without a dedicated button for powering on the device at this point, not having them for volume control seems unthinkable, suggesting that their absence in the image is either an oversight or they have been concealed in some way, perhaps by one of the new panels.

While the image raises many questions, the application does confirm we won't see a return to ultra-bright OLED displays. Filed April 1, the description (as translated by Google) pertains to a "portable LCD screen game machine."