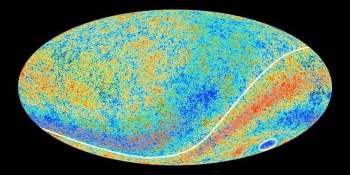 The supervoid is the biggest single structure in the observable universe.

For the longest time, Astronomers were puzzled by a "cold spot" in the universe - a section of space that was considerably colder than everything else around it. Now, they may have just uncovered its cause, with the discovery of a massive "supervoid" in the area - spanning an incredibly 1.8 billion light years in length.

Istvan Szapudi at the University of Hawaii described the object as possibly "the largest individual structure ever identified by humanity". The image to the right shows our observable universe, complete with the "cold spot" and the supervoid it contains highlighted by a white circle. The billion light year-long void is distinguished by its unusual emptiness.

Its existence only emerged thanks to a targeted astronomical survey, which confirmed that around 10,000 galaxies were "missing" from the part of the sky it sits in.

If you're confused on what exactly a supervoid is, well, it's not quite the same as a black hole, which is a vacuum with intense gravity. Instead, it just has... less stuff in it than usual. About 20% less stuff to be exact. "Supervoids are not entirely empty, they're under-dense," explained András Kovács, a co-author at the Eötvös Loránd University in Budapest.

This is the greatest supervoid ever discovered," Kovács said. "In combination of size and emptiness, our supervoid is still a very rare event. We can only expect a few supervoids this big in the observable universe."

As for how it relates to the cold spot, if we assume that the universe is expanding at an accelerating rate (a theory which the supervoid's existence adds weight to), photons of light would be expected to lose energy (cool) as they cross a void.

In summary, space is a crazy, huge place filled with crazy, huge things that most of us can't even begin to understand.