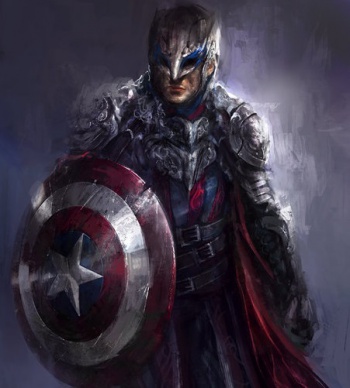 Ever wondered what Marvel's Avengers: Age of Ultron would look like in a dark fantasy universe? Now you don't need to imagine.

This being The Escapist, I'd say many of our readers are fans of both superheroes like The Avengers and dark fantasy tales like The Witcher. Perhaps you've asked yourself the following: What would it look like combining the two genres? The answer, as it turns out, is pretty damn sweet - at least going from this fan art making the rounds online.

Created by Daniel "theDURRRRIAN" Kamarudin, these images take characters from the upcoming Avengers: Age of Ultron film and redesigns them from a fantasy perspective. Captain America, for example, is an armored and robed warrior bearing his recognizable shield. Hawkeye is a masked archer with a magical bow that generates arrows. Black Widow looks like a pirate assassin who replaced her dual pistols with short swords. Iron Man, naturally, is the Sorcerer Supreme of this setting (at least until Doctor Strange arrives).

And Thor... okay, he doesn't look that different from a god of thunder, to be honest.

The gallery even introduces Quicksilver, Scarlet Witch, Vision, and Ultron himself. Ultron has probably undergone the biggest changes here - since robotics aren't a big deal in dark fantasy, he appears to be constructed from a reanimated corpse. For all we know Vision is in the same boat, although his mask and armor prevent us from glimpsing details. Meanwhile, Quicksilver is a dashing rogue, while Scarlet Witch perfectly fits the bill of resident sorceress.

Sure, these won't be the Avengers we'll see in theaters within a week - but they're still impressive enough that it's fun imagining their adventures. Which one is your favorite?