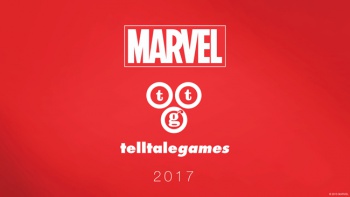 No word yet on which Marvel characters will feature in the upcoming series.

Telltale Games have built up a reputation as "those guys who make adventure games out of existing IP", getting its start with Sam and Max before moving on to conquer huge culutral properties such as Borderlands and even Game of Thrones. Now, Telltale has turned its attention to the gargantuan Marvel universe, and has announced a partnership with the comic book studio that will see a new adventure game series hit consoles and PCs in 2017.

"We've been busy," Marvel Games executive producer Mike Jones said before announcing the partnership. "It takes a long time to find the right partner. We have one special game we're excited about." He praised Telltale's approach to storytelling in video games, and stated that it was the exact quality it was looking to emphasize in upcoming Marvel titles.

"Marvel is about storytelling," added executive vice president Peter Phillips. He said that future Marvel games will strive for authenticity, will feel "exquisite" and "sexy," and will be celebrated by Marvel fans.

There's no word on which Marvel heroes will feature in the upcoming Telltale Game, but you can probably expect most of your favorites such as Spiderman, Iron Man and the X-Men to feature in it in some way.

I just hope that Telltale doesn't have too much on its plate, along with the aforementioned Borderlands and Game of Thrones series, it is also working on a new Walking Dead season and a Minecraft series.