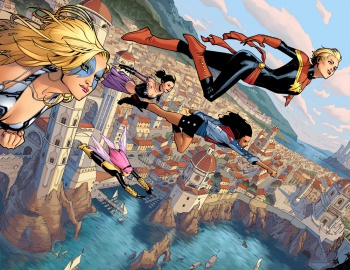 One of the more interesting announcements regarding Marvel's Secret Wars was that once it begins, the Avengers would dissolve. Sure, the combined Battleworld is protected by the Thors, but those particular superheroes won't be in a position to help out, perhaps because Battleworld is technically their fault. Instead, an all-female team called A-Force will rise from the ashes, something Marvel is shedding light on with Marguerite Bennett and Jorge Molina's artwork.

When several parallel Earths smash together to form Battleworld, they also bring heroes from each world together. The A-Force is one team formed in the union, an Avengers unit tasked with defending the all-female island nation of Arcadia. And considering Arcadia is surrounded by Mr. Sinister's forces on one side, and Marvel Zombies on the other, the A-Force has its work cut out for it.

She-Hulk, Dazzler, Medusa, and Nico Minoru are on the roster, as are classic incarnations of characters like Rogue and Phoenix. And based on the number of heroes featured in the released artwork, that's only scratching the surface. "We've purposefully assembled a team composed of different characters from disparate parts of the Marvel U," co-writer G. Willow Wilson said during the original announcement, "with very different power sets, identities and ideologies."

Arcadia may be a small location on Battleworld, but it's looking to be a very exciting one. A-Force #1 will launch with all its variant covers on May 20, 2015.