This was destined to be awesome. 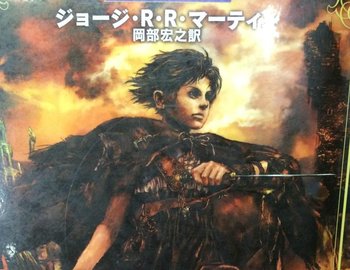 Thanks, Japan, for once again proving that you're still pretty much cooler than everyone else. For the manga version of George R.R. Martin's A Song of Ice and Fire series, Japanese publishing company Hayakawa commissioned artist Noriko Meguro to create covers highlighting some of the series' favorite characters. And yes, they are as awesome as you'd expect.

These covers provide an all-new glimpse into some truly beloved characters, including a few that seem to take inspiration from their onscreen counterparts and at least one that couldn't be further from his. Khaleesi is present with her dragons and shocking platinum hair, Samwell's awesome pose definitely portrays 'don't mess with me', and Jon Snow reps those crow feathers well in his Night's Watch cover. The award for most frightening cover, though, goes to Tyrion Lannister. There's something so terrifying about those big eyes...Don't mind me while I go turn on all the lights in the house.

Check out the covers below and pray to the old gods and the new that there will someday be an English version of this manga for purchase.

Let us know which cover is your favorite. I'll just be right here, fawning over Jon Snow.