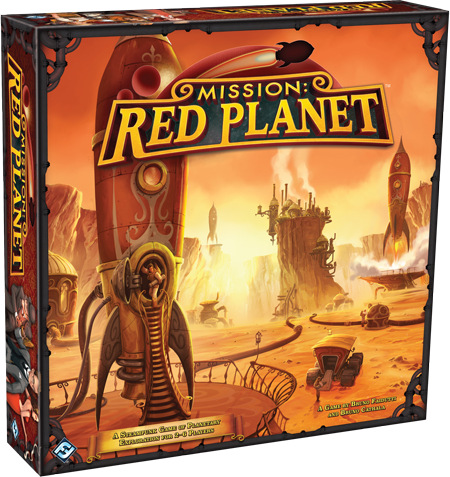 Originally released back in 2005, Mission: Red Planet dropped tabletop gamers into a steampunk past where the promise of rare minerals has driven a cadre of competing companies to launch colonization missions to Mars. Well received following its initial release, the game has sadly been out of print for some time. If a new announcement from Fantasy Flight Games is any indicator however, that may soon be changing. The tabletop publisher has revealed that it plans to print and sell a new edition of the game.

The new version won't just be a simple reprint, however. According to Fantasy Flight, its release of Mission: Red Planet will come complete with refined rules and a slew of updates "by the original designer." Among these will be additional zones for players to exploit, "fine-tuned" Missions and Discoveries, new Action Cards for the Event deck and expanded rules to allowing for a new maximum of six players and a minimum of two. Its visual presentation has also been given a make-over to help imbue the game with "a more contemporary look." Fantasy Flight wasn't able to offer any specific release date for the new edition but indicated that it would be hitting game stores "in the third quarter of 2015" and will cost $49.95.

The big question, of course, is whether or not the new edition will win an audience. While the original was well-regarded, the fact that it fell out of publication in the first place could be taken as a sign that the game has something of a limited appeal. Then again, with the resources of Fantasy Flight backing it, Mission: Red Planet could have a better chance of achieving longevity now than it did back when it first launched ten years ago.