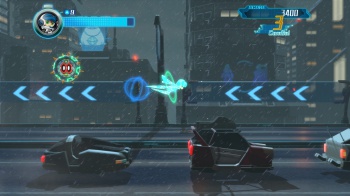 More content coming in more ways with a longer wait.

Deep Silver has announced an agreement to publish comcept's Mighty No. 9 worldwide, including a physical release at retail, along with new downloadable content. The deal will also bring more localized versions of the game, with subtitles in eight languages (including English, Spanish, French, Italian, German, Russian, Polish, and Brazilian Portuguese) and the addition of Japanese and French voice acting.

All of this positive news comes with with one disappointing bit. The new agreement, while providing for additional content and helping the game to reach a broader audience, also means a further delay. Mighty No. 9 is now scheduled for release on PC and home consoles in North America on September 15, followed by the rest of the world on September 18.

The new content consists of a bonus stage focused on Beck's rival, Ray. Completing the stage will unlock Ray as a playable character for the main game, who features a different set of skills and introduces new gameplay mechanics. The content will be included in the retail release and provided free of charge to all backers of the Mighty No. 9 Kickstarter campaign. Buyers of the digital release will be able to purchase the "Ray" DLC separately.

Physical copies of Mighty No. 9 will be printed for the PlayStation 4, Xbox One, and Wii U. Digital versions will be available for these platforms, as well as PC, PlayStation 3 and Xbox 360. Ports for PlayStation Vita and Nintendo 3DS, also digital, will be released at a later, unspecified date.

A spiritual successor to Mega Man from that franchise's creator, Keiji Inafune, Mighty No. 9 found astonishing success on Kickstarter. Achieving more than 400% of its initial funding goal, stretch goals expanded the project beyond the planned PC release to include console ports, additional characters, gameplay modes and a documentary on the making of the game.