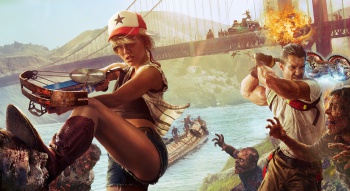 Dead Island 2 has a whole lot further to go before players will be able to get their hands on it. As stated in a tweet from the game's official Twitter feed today, the open-world survival horror game has been pushed back all the way to next year. Originally slated for release in spring, reports of an impending delay to fall of this year began to circulate earlier this month.

"We have been looking at the game long and hard," the statement reads, "and we have decided we didn't reach that goal we set out to achieve quite yet. This is why we have decided to delay Dead Island 2 to 2016."

That there is a delay should come as little surprise. Deep Silver and Yager Development have been very quiet about the progress of Dead Island 2, far too quiet for a major game with a launch window we're already in the middle of. The announcement is the first tweet from the game's official account since February, and no new trailers or gameplay videos have been released in eight months. This is not the behavior of a product from a major publisher coming to market on schedule.

Seemingly the most ambitious entry in the franchise to date, Dead Island 2 will bring the zombie outbreak from the islands to the mainland, introducing undead slaughter to real-world locations in Los Angeles and San Francisco. It's the first game in the series to be developed by Yager Development, perhaps best known for their work on Spec Ops: The Line, who took on development after series creator Techland opted not to make the sequel due to creative differences with publisher (and IP owner) Deep Silver.