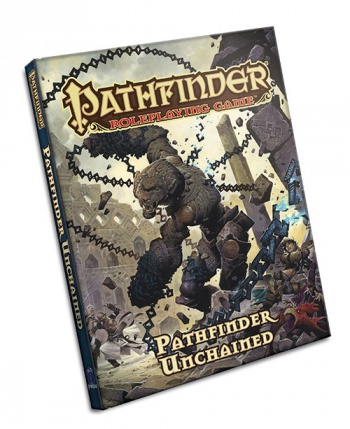 One of the best features of tabletop roleplaying is that there's a lot of freedom to tweak the rules. Between custom classes, GM-designed monsters, and optional game systems, tabletop groups can create campaigns that completely change the original game. If that's the kind of gamer you are, you'll probably be very excited for Pathfinder Unchained - an all-new supplement that aims to put designer tools into the hands of players and game masters alike.

So what exactly does Pathfinder Unchained offer that the core book doesn't? To start, Paizo completely redesigned the core classes, providing versions of the Barbarian, Monk, Rogue, and Summoner that are balanced and easier to play. There's also overhauled skill systems, letting players add more skills to characters or streamline them for faster play. There are even combat changes, including a huge list of action tricks fueled by your character's stamina.

And that's just the start. Paizo made new suggestions for alignment, multiclassing, and item creation systems. A simplified monster creation setup is included for making up creatures on the fly. The rules that interest me personally involve magical items - ones that become more powerful as your character levels up.

Spinning out of an attempt to continue Dungeons & Dragons 3.5's system development, Pathfinder Roleplaying Game is one of the biggest fantasy RPGs on the market. From all appearances, Pathfinder Unchained is where Paizo put all the insane ideas that could break the game - or make it much more awesome. If that interests you, it can be purchased online or from your local tabletop gaming store.