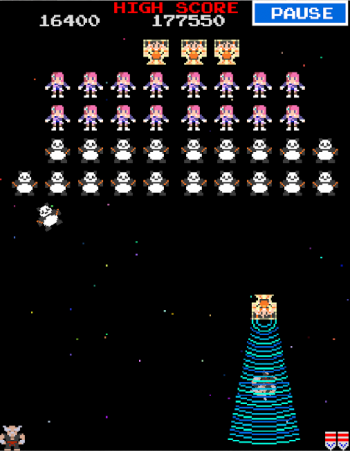 Bandai Namco is celebrating 20 years of Tekken in a mighty strange way. With next month marking the anniversary of the 3D fighting series' international launch to arcades, the publisher has released a new version of their classic arcade shoot-em-up, Galaga, featuring characters from the Tekken universe. The free game, Galaga: Tekken Edition can be downloaded now from Google Play and the iOS App Store.

Once you've downloaded the game, accidentally signed away the privacy of everyone you know on social media, and viewed an ad for a Tekken product, Galaga: Tekken Edition allows you to create a "squad" of three Tekken characters to replace the standard ships from the original Galaga. Heihachi, Lili, and Claudio are available to start, with three others unlocked through play, and the characters feature differing fire rates and projectiles.

Screenshots from the Galaga: Tekken Edition show that a few other Bandai Namco properties have been slipped into the game as well, including company mascot Pac-Man and the all but forgotten mouse policeman, Mappy.