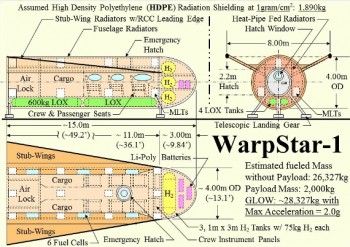 New tests show that NASA's EMDrive produces thrust in a vacuum - which means warp drive spaceships might be in our future.

Earlier this week we learned that the EMDrive - a propulsion device that already breaks rules of physics - might actually be generating warp fields. If true it's absolutely amazing news that could enable space travel. But science urged caution. There was still a possibility the data was flawed because the EMDrive test wasn't conducted in a vacuum. So while the reasonable instinct is to get excited, we need to wait for more information.

Now NASA has completed that vacuum test. The results were the same. The chances of warp drives in our future just increased exponentially.

NASASpaceFlight has posted a detailed breakdown of the technology, but in short - the EMDrive defies science to the point of being near-magic. First of all, it generates thrust in violation of the law of conservation of momentum. More importantly, when you fire lasers through its resonance chamber those beams appear to move faster than light. One possibility is that the EMDrive is generating a small warp field, technology that has widely been considered science fiction for decades.

"[T]he EM Drive's thrust was due to the Quantum Vacuum (the quantum state with the lowest possible energy) behaving like propellant ions behave in a MagnetoHydroDynamics drive (a method electrifying propellant and then directing it with magnetic fields to push a spacecraft in the opposite direction) for spacecraft propulsion," Eagleworks scientist Harold White explained. "The NASASpaceflight.com group has given consideration to whether the experimental measurements of thrust force were the result of an artifact. Despite considerable effort within the NASASpaceflight.com forum to dismiss the reported thrust as an artifact, the EM Drive results have yet to be falsified."

That's a lot of science speak, so let me put it in spaceship terms. Projections suggest that if a two-to-six person spacecraft was equipped with an EMDrive, it would reach the moon in four hours. Our current technology can send a satellite there in eight hours.

"After consistent reports of thrust measurements from EM Drive experiments in the US, UK, and China - at thrust levels several thousand times in excess of a photon rocket, and now under hard vacuum conditions - the question of where the thrust is coming from deserves serious inquiry," White concluded.

Once again, it's worth remembering that this may not be a warp field. The EMDrive testing is now about to undergo significant peer review while other labs try to replicate the results. And even if it checks out, it might not necessarily be feasible for space travel.

But if all goes well, at the very least we'll have propulsion technology that doesn't require fuel - which is insanely beneficial for future space initiatives. At the very, very best, we'll get warp drives that can visit places we once saw with telescopes. I cannot wait to see these results, and I expect I'm not the only one.