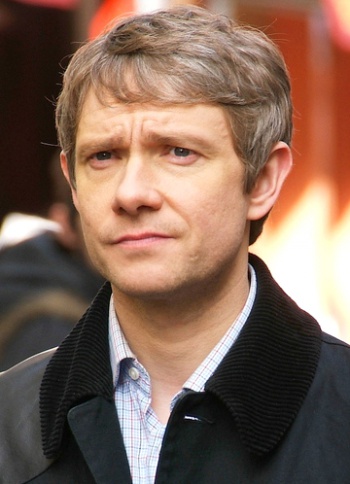 Martin Freeman - best known for the roles of "Bilbo Baggins" and "Doctor Watson" - has signed onto the Marvel Cinematic Universe for Captain America: Civil War

"From his roles as Bilbo Baggins and Doctor Watson to Tim in The Office, Martin's range from the dramatic to the comedic has consistently impressed us," Producer Kevin Feige said in a statement. "We couldn't be more honored or excited to have such a talented actor join the Marvel Cinematic Universe."

Who will Freeman be playing as, you might ask? So would we - Marvel's still keeping that detail close its chest, so he could be Spider-Man for all we know. But considering his stellar performances in Sherlock and The Hobbit he should prove a fantastic fit. Freeman will be joined by Chris Evans, Robert Downey Jr., Scarlett Johannsson, and more - basically the biggest MCU reunion that isn't called The Avengers.

But all I want to know is this: When will he pull off a hat trick by meeting Benedict "Doctor Strange" Cumberbatch in yet another fictional universe? Captain America: Civil War hits theaters on May 6, 2016 - precisely a year and one day from now.