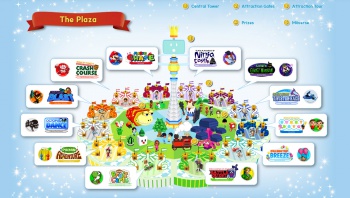 Nintendo announced its partnership with Universal Studios today, but provided no additional details.

How awesome would a real-life Nintendo theme park be? This is the hypothetical Nintendo fans have been dreaming of for years, and was recently re-ignited with the virtual Nintendo theme park that was the Wii U's Nintendo Land. Now, it looks like those fanboy dreams are about to come true, as Nintendo has just announced a partnership with Universal Studios to bring Nintendo-themed attractions to its various resorts around the world.

"Nintendo and Universal Parks & Resorts today announced plans to bring the world of Nintendo to life at Universal theme parks - creating spectacular, dedicated experiences based on Nintendo's wildly popular games, characters and worlds," said the companies in a joint press release. "The immersive experiences will include major attractions at Universal's theme parks and will feature Nintendo's most famous characters and games," it added.

For those of you expecting any additional details on the what, when, and where of this deal, I'm afraid that for now, this is literally all we have to go on. "More details will be announced in the future," promised the companies, "as the Nintendo and Universal creative teams work to create specific concepts."

Universal Studios currently has four theme parks world wide - two in the USA, one in Japan, and one in Singapore, with plans for four more in South Korea, UAE, China and Russia.

So until then, let us dream. What would be the best Nintendo-themed rides? The obvious ones for me are a Donkey Kong-themed mine-cart rollercoaster, a Metroid-themed lazer tag simulator, and of course, a Luigi's Mansion haunted house.