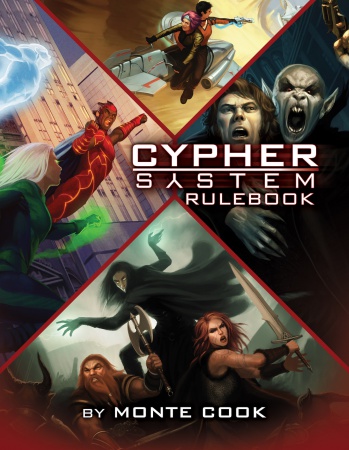 Monte Cook Games' Cypher System - which powered Numenera and The Strange - is available for pre-order as a massive setting-free rulebook.

Two of the most-talked about tabletop games right now are Monte Cook's Numenera and The Strange - largely thanks to the success of the Cypher System. These rules are easy-to-grasp while offering layers of complexity, thanks to increased player agency and temporary power sets. If Cypher has one drawback, it's the heavy focus on settings with a science-fantasy flair - something GMs need to hack for alternate campaigns. But that's about to change with the Cypher System Rulebook - a massive 416-page hardcover that lets player run Cypher in any setting they choose.

"You can't take a Numenera nano and plop her down in any genre," Monte Cook Games' Charles Ryan wrote in a blog post. "And if you tried to make the type fit more into a fantasy setting, it wouldn't fit into a science fiction one. Oh, and superheroes-those throw a big wrench into things. So clearly this book needed to go way beyond the bounds of what was already designed for our existing games."

In response, Monte Cook has expanded the Cypher System with new descriptors and foci for alternate genres. There's also four new character types, NPCs, and all kinds of new creatures. There's even new optional mechanics for superheroes, supernatural horror, and massive starship battles. And if you're already a fan of Numenera or The Strange? You can plug these systems into your current campaigns with no trouble - which has huge implications for The Strange's parallel dimensions.

The Cypher System Rulebook pre-order is out right now, and Monte Cook Games will throw in a free PDF for any orders prior to June 26. The book itself launches in early August, giving GMs lots of time to prepare a campaign setting - literally any one they'd like.