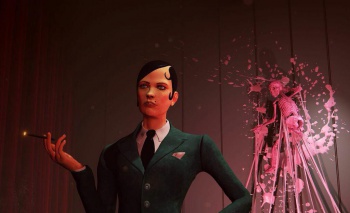 The Black Glove - the debut project of several former Irrational Games employees, has been shelved.

When Take-Two closed down BioShock developer Irrational games it was a time of great sadness in the gaming universe, for the studio contained some of the greatest minds in the universe. Fortunately, said great minds banded together to form "Day for Night Games" and announced The Black Glove. Unfortunately, The Black Glove has now been shelved indefinitely following a failed Kickstarter.

"We've decided to shelve The Black Glove for now," said Day for Night Games' creative director Joe Fielder in a blog post. "We garnered some interest, but didn't find the perfect glass slipper we were looking for and, understandably, began to lose key people to full-time work elsewhere," he explained.

He did, however, add that "We've invested thousands of hours and considerable thought and emotion into the project, so it's hard to step away, but it's not forever," giving hope that we may see the psychedelic narrative-focused game return at some point in the future.

"Design legend Paul Neurath said to us recently, 'In my experience, good ideas don't have expiration dates.' They're words we've really taken to heart, so we intend to return to The Black Glove later when we can do it right."

But don't feel too bad for the fine folks at Day for Night Games, as pretty much all of their members are busy with other projects. Fielder and fellow writer Charles Soule contributed to Human Head's iOS horror game Lost, Within; artist Robb Waters is working on Underworld Ascendant alongside Fielder, who's now a design director at OtherSide Entertainment; and animator Pete Paquette is developing a narrative/puzzle game at Wolf Island Games.