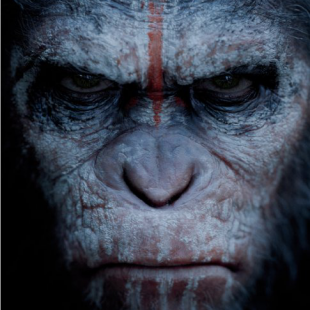 The third Planet of the Apes movie will have a name that nobody could have possibly predicted.

On the off chance that you hadn't heard, the new Planet of the Apes are pretty good. Granted, it doesn't take much to make an awesome movie about intelligent apes fighting humans. They were able to do it the 1960s with hammy acting and rubber masks. That said, there are many who consider the new Apes to be legitimately good films and, in turn, are eagerly awaiting the series' continuation after the less than happy ending of Dawn of the Planet of the Apes. Now, its creators may have made a small step toward making the next movie a reality. Namely, they've named it.

And what will the title of the next Apes movie be, you ask? According to reports, the new chapter in the Apes film saga will be titled War of the Planet of the Apes. If that seems at all obvious, it's probably just because it's incredibly appropriate given the hostile state of the world at the end of Dawn. Discussing the franchise's third film in an interview last year, Dawn director Matt Reeves indicated that War of the Planet of the Apes would focus on Andy Serkis's character Caeser "becoming the ape Moses" and his struggle to lead his people through their intensifying conflict with the human race.

Speaking personally, I have to say that I didn't like Dawn of the Planet of the Apes as much as some other people did. Too many of its human characters struck me as being too stupid for their own good. That said, the sequences focused on Caeser and his tribe of intelligent apes were still quite fantastic and I look forward to seeing how things have changed for that character and where his journey takes him in this evolving and expanding reboot.