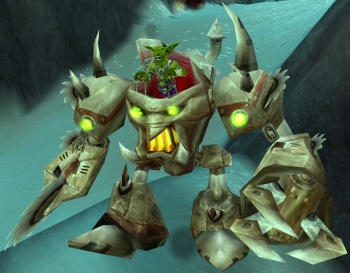 A reported 100,000+ World of Warcraft players have had their accounts banned for six months.

Blizzard recently announced via an official blog post that it had swung down its mighty banhammer on a "large number" of World of Warcraft accounts that were found to be using third-party programs that automate gameplay (IE: botters). According to a screenshot entailing a conversation with a Blizzard Game Master, the number of bans exceeds 100,000 - meaning a little over 1% of World of Warcraft's entire population has suddenly been snuffed.

According to the Game Master, the bans are not "permanent" account bans, but rather, six month bans.

"We're committed to providing an equal and fair playing field for everyone in World of Warcraft, and will continue to take action against those found in violation of our Terms of Use. Cheating of any form will not be tolerated," said Blizzard blue poster Lore.

Furthermore, the makers of popular WoW bot Honorbudy have released an official statement confirming that the recent banwave had specifically targeted its bot, and would thus be completely out of commission for the time being. "With Honorbuddy you thought that we are unbeatable, we never thought that, we've succeeded since 2010 - Honorbuddy had not a single software detection. It seems there is one now," said an Honorbuddy representative.

"We want to be offering Honorbuddy as soon as possible. Right now, we have no news for you. Please do bear with us - immediately we have news we will share it," it added.

So the bottom line is, if you cheat in a Blizzard game, they probably will find you sooner or later!