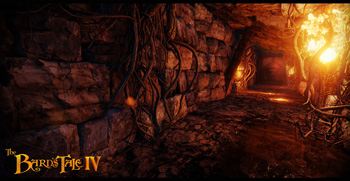 inXile Entertainment has announced the start date for an upcoming Kickstarter campaign to fund development of a new sequel to The Bard's Tale trilogy. The fundraising drive will begin on June 2, the same date as the release of the franchise's first game, Tales of the Unknown, Volume I: The Bard's Tale, thirty years ago.

According to a press release from inXile, the new installment will present the same first-person dungeon crawling gameplay found in prior titles of the series, in which players are challenged to solve puzzles and riddles while besting monsters, brigands, and other foes in combat. The Bard's Tale IV will utilize Unreal Engine 4 and the team plans to use photogrammetry to create 3D environments based upon photos of actual Scottish architecture. Scottish culture will also be referenced in the game's music and sound design to enrich the existing setting.

The first three volumes in The Bard's Tale were developed by Interplay and released between 1985 and 1990. In 2004, inXile (a studio founded by former Interplay co-founder Brian Fargo, who contributed work to the original trilogy) released a Bard's Tale title unrelated to the original series, which played in a third-person perspective and served as a parody of fantasy genre role-playing games rather than a continuation or remake of prior titles bearing the name.

The Bard's Tale IV will be a direct sequel to the first three games, and inXile has confirmed that it has acquired the rights to use content from the original series in development of the new title.