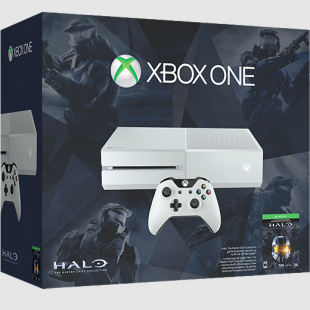 Microsoft will release a new $349 Xbox One bundle complete with a white console and a digital copy of Halo: The Master Chief Collection to US retailers later this month.

The Xbox One isn't selling poorly. That being the case, it's also perhaps not selling as well as Microsoft would like. Sony's PlayStation 4 has soundly defeated its pretty much since the moment it hit the market. The only exception was during the closing months of 2014 when the Xbox One, bolstered by holiday sales and affordable bundles, managed to usurp the PS4's throne as the reigning king of console sales. Likely hoping to repeat that success, Microsoft today announced its intention to release a new special edition bundle aimed at getting more Xbox's into American homes.

Dubbed the Xbox One Special Edition Halo: The Master Chief Collection Bundle (rolls right off the tongue), the new bundle will contain pretty much everything an Xbox fan could want to get started with the Xbox One. In addition to a special white-shelled 500GB console, the bundle will include a controller, HDMI cable, chat headset and a digital download code for Halo: The Master Chief Collection. Best of all, the whole thing will only cost $349 which is a significant bargain when you consider that the Xbox One and Master Chief Collection cost $400 and $60 when purchased separately. Microsoft didn't give a specific release date for the bundle but indicated that it will be available "at participating U.S. retailers" later this month.

We'd say that gamers keen on getting an Xbox One should take advantage of this but, honestly, we don't know if rushing is really all that necessary. It's not like this is the first time Microsoft has released a $349 Xbox One bundle this year, after all. In fact, just back in March the company gave gamers a nearly identical bundle with a black Xbox instead of a white one. Almost makes you wonder why they don't just drop the console's standard price and be done with it.