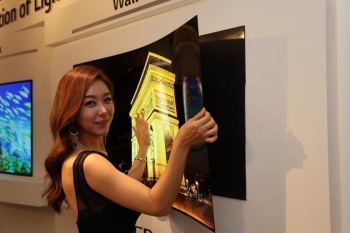 LG's new superthin OLED TVs are also super flexible. Imagine rolling up your TV to take to your friend's place?

Ever since we cast-off the CRT, TVs have been getting thinner and thinner. Now, it looks like LG is set to finally end that arms race with its crazy new superthin OLED TV. At just 0.97mm thick, the 55 inch TV can be rolled up like a sheet of paper, and stuck to a wall with a magnet like wallpaper.

The OLED weighs just 1.9 kg, and is a significant upgrade from LG's previously revealed 4.3mm model. Last year, LG unveiled two 18-inch OLED panels - one that's rollable and another that's transparent. According to LG, the 1,200-by-810 flexible OLED panel can be rolled up to a radius of 3 centimeters without affecting the function of the display.

As for the future, LG plans to develop a 99 inch OLED display by the end of the year, meaning that you will soon be able to literally wallpaper your house with TVs.

Yeo Sang-deog, the head of LG Display's OLED division, is astounded at the amazing progress that has been made in OLED development. "It has taken a year and half for us to raise the yield to this level (for OLEDs), while it'd taken nearly 10 years to achieve the yield for LCDs," he said.

There's no word on when these babies will be available for the general population to purchase, but you can probably bet that they will be very, very expensive.