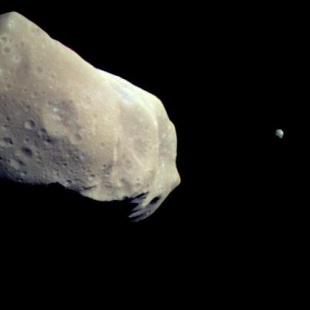 NASA and the ESA will crash a space probe into an asteroid in 2022.

When I was but a wee lad growing up in rural Quebec, I was kept awake most every night by two fears: nuclear destruction and an asteroid apocalypse. The first fear stemmed from my watching the nuke scene in Terminator 2 one too many times. The second meanwhile was pretty much just a situation of why the hell not? If I was going to be afraid of one apocalypse situation then why not have nightmares about another one? In the intervening years between now and then I've grown less scared of things like that. And now, if NASA and the European Space Agency have their way, no little boys anywhere will have to fear sky-born murder rocks ever again.

According to reports, the two space agencies have recently teamed to put together and test a plan aimed at discovering whether or not humanity actually could deflect an asteroid if push comes to cosmic shove. According to the plan, the ESA will first build and launch the spacecraft AIM. Once complete, AIM will be launched in the year 2020 to a nearby binary asteroid belt where it will monitor Didymos, an asteroid about 2,625 feed wide. AIM will also deploy a landing craft to "Didymoon," a smaller rock (560 feet wide) that currently orbits Didymos.

Two years later in 2022, NASA will complete and launch DART (Double Asteroid Redirection Test), a special probe that will fly toward the same asteroid belt and slam into Didymoon at a speed of about 13,420 MPH. "AIM will be watching closely as DART hits Didymoon," said ESA mission leader, Ian Carnelli. "In the aftermath, it will perform detailed before-and-after comparisons on the structure of the body itself, as well as its orbit, to characterize DART's kinetic impact and its consequences."

In other words, the two organizations plan to smack Didymoon really hard and see what happens. The obvious goal of this is to figure out just how big of a smack we'd need to deliver if we were to one day scan the heavens and discover something dangerous heading our way. It might not be firing Bruce Willis into space, but it's a start.