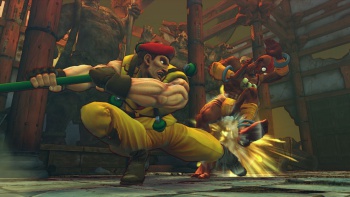 When the PS4 launched, fighting game fans rejoiced at the promise of both a new Street Fighter, and a "remastering" of the most-recently released Street Fighter IV for the new system. However, they were equally dismayed at the thought that their expensive PS3 fight sticks would not be compatible with the PS4. Thankfully, Lab Zero Games came to the rescue, offering a driver for PS3 fight sticks on PS4, and now, Sony and Capcom have decided to use said driver for the PS4 edition of Street Fighter IV.

"We've also included Lab Zero's drivers so that USFIV will support licensed PS3 FightSticks as well," said Sony in a blog post. "For more details on how this will work, please check the Capcom Unity or Lab Zero sites after the game launches."

Sony also reminded us on a few more upcoming features of the remastered game: