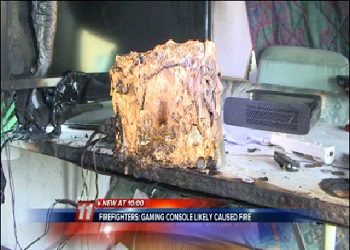 When a console is released to retailers one thing you can generally count on is that the people who made it probably spent no small amount of time mulling over the various bullet points they wanted to throw on its box. Chances are, however, in the case of the Wii, that Nintendo didn't haven't to think too hard when it decided to not include "sets your house on fire" on its list.

According to reports that surfaced last Friday however, that's exactly what one Colorado man is claiming his Wii did. Returning home from a meeting, Colorado Springs-resident Trevor Pellegrin received a phone call from neighbors telling him that his mobile home had caught fire. The fire ruined some of his clothing, destroyed his television and additionally caused "extensive smoke damage" to the roof of his home. An Xbox 360 present during the fire however, seemed to have survived intact. While Nintendo has yet to offer any sort of comment about the incident, Pellegrin has indicated that fire investigators are "99 percent sure" that his Wii was the source of the blaze. "This had nothing to do with the wires," he said. "It started in the actual console of the Wii."

The mystery, of course, is how exactly the popular console burst into flames. While Pellegrin admits he was using it to watch Netflix earlier that day, he claims to have shut it off when he left his home. And even if he hadn't, we're pretty sure that people have played their Wii's for extended periods of time in the past without starting fires. Pellegrin's insurance company intends to survey the scene and X-Ray the Wii to see if that yields any answers. Suffice it to say, we'll be interested to see what conclusions they come to.