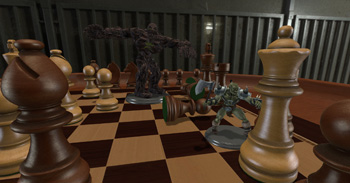 Play board games without having to look directly at another human.

Berserk Games has set a date for the final version release of Tabletop Simulator. It will complete its Early Access beta on Steam and release in full on June 5.

The product of a successful Kickstarter campaign last year, Tabletop Simulator seeks to provide all of the same capabilities as a real physical surface for the purpose of playing games. Presented in a first-person perspective, the program features a variety of table designs, mechanics for managing die rolls and card decks, the ability to angrily flip the virtual table, and a step-based system of moves which allows easy restoration of a board when someone does flip that table (or any other needed correction).

Packaged with a collection of classic board games (including Chess, Checkers, and Dominoes), the software also allows players to add new objects to a growing library of user-generated content. More than 3,000 items have been added thus far, including whole translations of out-of-print titles, new games created by users, and components to be used in tabletop role-playing.

Tabletop Simulator can be purchased on Steam while it remains in Early Access at a discounted price of $14.99, before assuming its standard price of $19.99 after release.

Coinciding with the final release will be the first official downloadable content. A virtual adaptation of the Superfight card game, created by Darin Ross and physically published by Skybound, will be sold separately for $9.99.