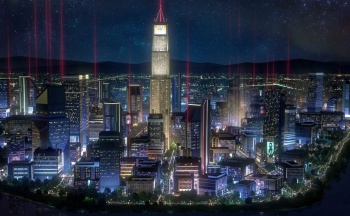 2K has launched a teaser site for it's mysterious new sci-fi dystopia: Advent.

2K Games, the parent studio behind developers and titles such as Firaxis's Civilization and Gearbox's Borderlands, has just teased an upcoming science fiction game, that it is calling Advent, via what appears to be a viral marketing website. Advent Future.org is a website for the fictional Advent corporation, advertising a kind of sci-fi utopia, where they have halted aging and everyone is happy.

However, dig a little deeper and you'll see that the website has been subtly "hacked" into dropping hints that the magical Advent isn't quite as virtuous as they seem.

So from the looks of things Advent will be about an all-powerful corporation with a little too tight of a grip on its citizens, and a rebel uprising trying to pull the wool off of everyone's eyes. It's a fairly common tale, but it'll be interesting to see how 2K pulls it off.

As for what kind of game it will be, all we have to go off are a few in-game images of sci-fi cities. Could we be looking at a sci-fi city-building simulator? That would be cool, for a nice change of pace.

We'll have more info as it becomes available.