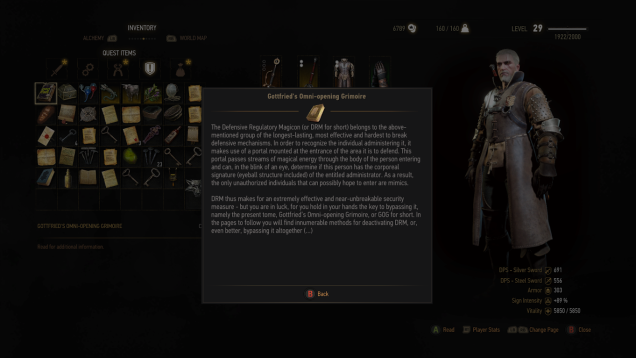 Gamers have discovered an item in The Witcher 3 making fun of DRM.

If there's one thing that gamers can agree on, it's that DRM sucks. And while a number of publishers and developers work hard to make their games as inconvenient to play as possible, there are some who not only work to limit the spread of DRM, but also poke fun at it when the opportunity arises. Take CD Projekt RED, for instance. A big opponent of DRM, the studio has made statements against its inclusion in games and even keeps the products in its digital storefront GOG completely DRM-free.

Most recently, the company apparently decided to take a clever little potshot at DRM in The Witcher 3. Said jab was discovered when a player stumble across a unique item called Gottfried's Omni-opening Grimore (aka: the GOG). What's the Grimoire used for you ask? Well, according to the game, it can be used to get past Defensive Regulatory Magicons, "or DRM for short."

DRM, as described by the game, is a "near-unbreakable" "defense mechanism" designed to "recognize the individual administering it" using portals that pass "streams of magical energy through the body of the person entering." These streams then identify the "corporeal signature" of the person using it and keep out "unauthorized individuals." The only exception, of course, are pesky "mimics" who are able to use their skills to circumvent the Magicon's defenses. Gottfried's Omni-opening Grimoire, in turn, contains "innumerable methods for deactivating DRM, or, even better, bypassing it altogether."

The satire so thick that we're pretty sure we could scoop it up and eat it if we had a spoon handy. Give the full item description a gander and let us know if you think it's as amusing as we do.