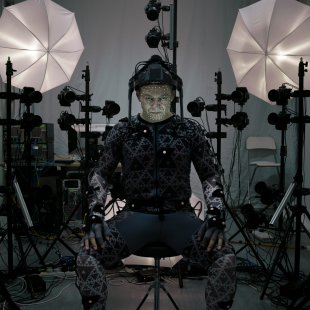 To the surprise of everyone everywhere, Andy Serkis will be playing a motion-captured character in Star Wars: The Force Awakens.

When Andy Serkis was announced as a part of the cast of Star Wars: The Force Awakens, the first thing that most people probably asked was "I wonder what motion-capture character he'll be playing this time?" Few will likely be surprised, in turn, to learn that Lucasfilm has announced who Serkis's character will be and revealed that he will, in fact, be working with motion-capture.

The news debuted today at the official Star Wars website where it was confirmed that Serkis would be playing the character Supreme Commander Snoke. The announcement was accompanied by a photo of Serkis decked out in motion capture gear. The picture had apparently been intended for the most recent issue of Vanity Fair where a slew of other Force Awakens photos, including a similar motion capture image of actor Lupita Nyong'o, were published. That gallery can be found here.

Sadly, the reveal didn't include much else in the way of details pertaining to who Snoke will actually be. That said, we're willing to go on a limb and say that he's probably one of the bad guys. Maybe we're wrong, but there's just something about having "Supreme Commander" in front of your name that screams "I'm a villain."