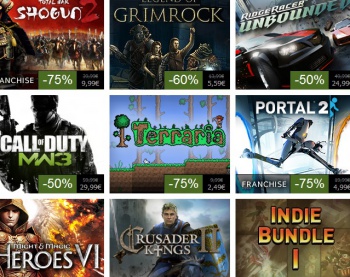 Valve's latest Steam Summer Sale begins on June 11, and will be followed by a full two days of encore sales.

Summer technically begins on June 21, but I'd say most of us would be happy if it could start now. But for many gamers, summer doesn't kick off with weather and ending school programs - it happens when Valve kicks off the annual Steam sale. This period heralds insane price cuts and discounts across the entire Steam library and puts a rather significant drain on our wallets before starting the vacation season. But at least now we have some time to prepare, as this year's Summer Sale runs from June 11-20, 2015.

The news broke today when IGN Russia spotted a post on VKontakte, a social network platform used across the country. While there aren't any details on specific offers, it states that the sale will run for just over a week followed by two days of encore sales. If it's anything like previous Summer Sales, Valve will probably also run a meta-game like the Steam Summer Adventure that let players collect and trade digital trading cards.

Now if you'll excuse me, it's time to update my wishlist.