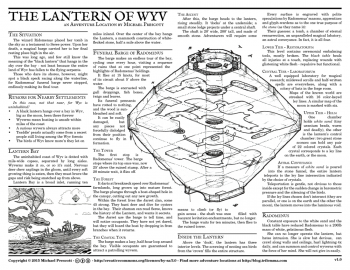 Looking for inspiration for your tabletop RPG campaign? Check out One Page Dungeons, which just revealed its 2015 contest winners.

Tabletop roleplaying is lots of fun, but at first glance it seems daunting. You need to design characters from scratch, generate adventures, and who has time to chart out all those dungeons? But the truth is you don't anything sprawling and elaborate - you can craft something highly impressive on a single sheet of paper. For proof, look no further than the One Page Dungeon contest, which just announced its 2015 winners.

One Page Dungeon is an open RPG contest that's been running since 2009 with only a few rules - you have to fit your entire RPG dungeon onto a single A4 sheet of paper and put it under a Creative Common Attribution license. Otherwise anything goes, with submissions covering vault heists, cave spelunking, and even mysterious time travel plots. Some dungeons are immaculately detailed while others are barebones, but all are incredibly easy to play - just print the sheet and ready it for the system of your choice.

In fact, this year's selection was so good that the judges selected three first-place winners. First up is "Furthest Farthing's Frog Pond" by Edward Lockheart, featuring a village where an otherworldly creature drives NPCs to depression and suicide. Next is Michael Prescott's "The Lantern of Wyv", an ancient wizard's tomb floating above bay waters. Last but not least is P. Aaron Potter's "A Stolen Song", where you explore the ruins that trapped a prophet's spirit long ago.

And that's only scratching the surface - between first, second, third-place entries, and honorable mentions, there are 27 different dungeons to choose from. Every single one of these could easily generate an evening's entertainment - perhaps more - or inspire your GM to get creative with their own dungeons.

Although if I had to pick one to run with my group tonight, I'm loving Ulo Leppik's "Teeny Tiny Dungeon" - where player characters are shrink down to an inch high and explore a small hole in the wall. Which one is your favorite?

Congratulations to all of this year's contributors!

All One Page Dungeon entries may be distributed under the Creative Common Attribution-Share Alike 3.0 license.